Finding our Worth Can Never Come from Personal Achievement 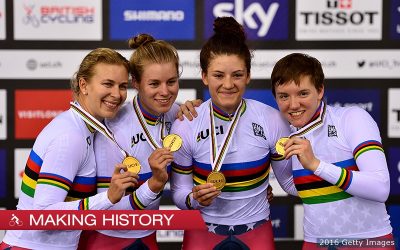 At the height of her career, three-time world champion cyclist Kelly Catlin excelled at everything she put her hand to. Her unmatched drive for excellence led her to win gold medals in the women’s team pursuit at the 2016, 2017, and 2018 UCI Track Cycling World Championships, and a silver medal in the 2016 Summer Olympics.

Kelly also had a brilliant mind. She was enrolled as a graduate student studying computational and mathematical engineering at Stanford University. She could speak fluent Chinese and was an amazing classical violinist. Catlin had a supportive family and plenty of friends—seemingly everything that anyone could want in life. Yet close to the peak of her career, in March 2019 at the age of 23, she tragically ended her own life. Her family, friends, and teammates were devastated.

Just months before her death, she had a cycling accident that resulted in a concussion. It later led to struggles with anxiety and depression and a sense that life was meaningless. Mounting health problems placed her career under serious threat. It appeared that she would have to pull out of the cycling team for a period of time. In her depressed state, it was all too much for her to take, and she chose to end it all.

Kelly Catlin’s father, Mark Catlin, explained that he believes Kelly suffered from a number of factors that led to her death—“concussion, overtraining, stress from trying to juggle schoolwork with cycling, frustration from being unable to train like she wanted to because of her injuries. She also had an all-or-nothing approach to life that could not accept failure or letting others down.” [1]

Though Catlin suffered a brain injury, there are many people in our world who have never suffered head trauma, yet feel life is meaningless. Stories abound of successful people who have attained fame, reached high educational goals, made lots of money, had good looks—but discovered these achievements didn’t make them happy on the inside.

What happens when your sense of value is based on your achievements, but then you experience failure? Perhaps we need to reconsider the basis of our self-worth. A good time to pay attention to what we think of ourselves is our self-talk when we don’t reach our goals. What do you say to yourself at those times? “I’m not good enough. I’m not smart enough. I’m not pretty enough.”

At times like these, you would do well to stop and replace those destructive thoughts with thoughts about what God thinks of you. You see, the Bible teaches that our value is not based on our achievements, but on the fact that were simply created by a loving heavenly Father. “Behold, what manner of love the Father has bestowed on us, that we should be called children of God!” (1 John 3:1). Let that thought sink deep into your bones like the sunshine on a frosty morning.

The God who made you, loves you, and no matter what you have been through in your life, He has planned a future for you filled with hope. (Read Jeremiah 29:11.) If you are looking for lasting love, look no more. Turn to the Lord who says to you, “I have loved you with a love that lasts forever” (Jeremiah 31:3).

You cannot earn your true sense of worth by looking good in the eyes of others. It’s like chasing a butterfly you can never catch. No matter how many trophies you win or how much money is in your bank account, the peace and joy of knowing you have true value comes by looking at the One who stretched out His arms on a cross and died in your place.

Jesus gave His life for you because He loves you. When you rest in His love, you never need to doubt your value again.