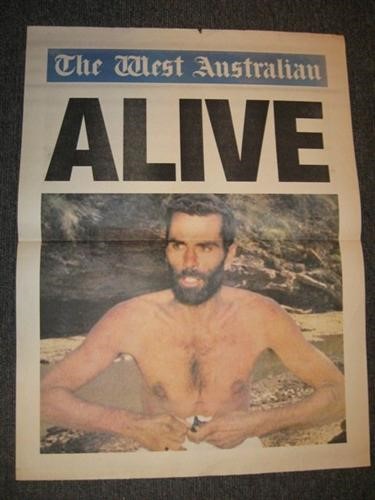 Amazing Fact: One of Australia’s most famous outback desert rescues occurred in 1999, when 33-year-old Alaskan fire fighter Robert Bogucki was found after 43 days wandering lost and alone in the Great Sandy Desert on a quest to “make peace with God”. After going without food for about six weeks and water for twelve days, Bogucki had lost 30 kilograms during the ordeal.

Bogucki’s story and the search for him were made into a mini-series entitled “Miracle in the Desert”. One of the miracles of the story was the discovery of a handmade sign by Robert made in stone with the words “Help”. After 12 days the search was to be called off, but this sign kept rescuers and family searching until he was found.

The Australian outback is a very beautiful place – but venture into it unprepared like Robert Bogucki and you’ll soon find out just how hazardous it can be. Many venture into life unprepared and soon run into trouble. Many put up “signs” or seek help like Robert but often these calls for help are missed.

In the last 12 months we have witnessed a time in history which shows us just how unprepared many have been and has resulted in increased calls for “help”. These calls for “help” come in many forms from “loneliness “or need for “love” to calls about the “future” and “how best to keep one’s family protected”.

Since the arrival of the coronavirus, depression, anxiety and loneliness in Australia have shot up. In any one year, around 1 million Australian adults have depression, and over 2 million have anxiety which in the last 12 months has accelerated.

This is profoundly tragic! But just as rescuers saved Robert Bogucki, we can also help rescue despondent hearts by bringing them the eternal hope found only in Scripture.

The enemies of Jeremiah, God’s prophet, likewise threw him into a pit to die, “[casting] him into the dungeon, [where he] … sank in the mire” (Jeremiah 38:6). But Jeremiah had a faithful friend “above,” Ebed-Melech, who pleaded with the king on Jeremiah’s behalf—and received permission to rescue him.

The only answer to being pushed down emotionally is to look up into the face of our compassionate Saviour above. That’s the message you send to thousands of people across rural and outback communities in Australia. The highest rates of depression and anxiety exist in outback communities all across Australia. We reach our audience in rural Australia via our broadcast on 9GEM and the on-demand platform 9NOW.

The increased viewership has led to extraordinary growth in our bible school. We currently have just over 1,200 people actively participating in undertaking bible studies via our Australian based bible school. Each month we are sending out nearly 350 new bible study guides to people starting their course. Many of you know the Amazing Facts Study Guides covering topics like:

Each of these topics is highly relevant! Who’s not talking about Marriage with the recent separation of Bill & Melinda Gates – If they cannot survive with all the money in the world how can any marriage last?

Our partnership with you is as people listen and read the study guides the Holy Spirit begins to work on their hearts, and things being to change.  One recent listener said “My marriage was failing and temptations increasing, but I began to study on what the bible says on marriage and things changed….”   Carl

Like he did to Carl, the enemy has trapped many more in a miry pit of sin. They need a friend above to intercede with prayer and to lower a rope of salvation. This is what you do when you co-labour with Amazing Facts Oceania. You are the hands and feet of their Best Friend above, Jesus.

Pr Doug recently said “I believe the tumultuous times we are seeing are prophetic. As the foundations of our nations are being shaken, letters continue to pour in from people all around the world struggling to look up. The number of seekers accessing our websites, sending in questions, signing up for Bible studies, and asking for resources keeps going up!”

We ask that you prayerfully consider financially supporting the Amazing Facts Oceania Ministry as the financial year comes to a close. Our Australian office with one full time staff and three volunteers needs your support to continue to “lower the rope of support” to those who need rescuing so we can have more stories like “Outback survival stories that’ll stop your heart”.