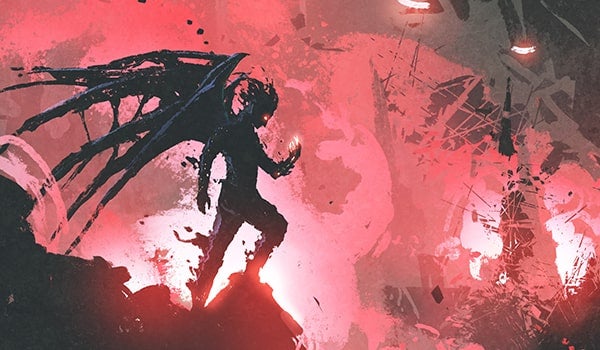 Long ago, there lived a greedy king who wanted the throne all to himself and ordered his servant to drown his niece’s newborn twins in a river. The servant, however, secretly spared their lives, floating them downstream in a basket.

The basket was eventually swept onto the riverbank, where it was discovered by a wolf, which took the babes to her cave and nursed them. Eventually, they were found by a shepherd, who raised them as his own. When the boys had grown and learned of their true identity, they slew their granduncle in revenge.

The twins then returned to the wolf’s cave and established a city nearby, but not before one murdered the other over a quarrel as to the city’s exact location.

And that, as the story goes, was the founding of the great city of Rome.

Supposedly named Lupercal by the brothers, the wolf’s cave became the site of “an ancient pagan festival, held each year in Rome on February 15.” Called Lupercalia, this fertility rite was traditionally replete with animal sacrifice, public nudity, and fornication. Today, it is one of the few holidays celebrated by the Satanic Temple, a self-proclaimed “religious organization” that has as of late been making headlines.

And it is this pagan holiday that will serve as the theme for the Satanic Temple’s first-ever conference, to be held in Scottsdale, Arizona, from February 11 to 13, 2022. Recently announced on the organization’s Instagram on November 15, SatanCon costs $95 a ticket and is already sold out.

According to its website, the Satanic Temple’s observance of Lupercalia is more of “a ‘hail yourself’ day” instead of adhering to the holiday’s original practices, a kind of “celebration of bodily autonomy, sexual liberation, and reproduction.”

Its conference will include “presentations that discuss …. efforts to protect members’ reproductive rights” as well as “psychiatric abuse,” abuse of children at school, and “addiction recovery.” Also mentioned was the promotion of “the Temple’s after-school club,” a response against “proselytizing organizations.” It will also offer “vendors and entertainment.”

Where the Satanic Temple chose to hold SatanCon is a direct reaction to its previous lawsuit against the city of Scottsdale. In early 2016, members of the Temple’s Arizona chapter began contacting several of the state’s city councils that allowed members of the public to pray to open their various meetings.

The Satanic Temple’s co-founder Lucien Greaves, a pseudonym, had written a prayer to be recited at the meetings. The prayer was read aloud by Michelle Shortt, then head of the Arizona chapter, during a live interview with ABC15 Arizona and included this explicit reference to Genesis 3: “Let us embrace the Luciferian impulse to eat of the tree of knowledge and dissipate our blissful and comforting delusions of old.” It ended with this praise: “It is done. Hail Satan.”

When the city of Scottsdale was contacted, it first scheduled and then later denied the request on the basis that the Satanic Temple lacked “a substantial connection to the Scottsdale community.” The Temple subsequently sued the city, citing “religious discrimination,” and lost. It went on to appeal and, in May 2021, lost again in the U.S. Court of Appeals for the 9th Circuit.

Its attorney, Stuart de Haan, targeted the Christian faith as the source of the problem. “What we’re seeing in the United States with the term ‘religious liberty,’ what it really means is Christian supremacy. … They really have no concern with liberty for everybody, only liberty for themselves and those that they like,” he said.

And according to Greaves, choosing to hold SatanCon in the very city in which the Satanic Temple was defeated is an act of “good will.” He explained, “In the course of litigation, Scottsdale officials desperately made clear that they are, in fact, accepting and inclusive regarding Satanists. … We accepted that as an invitation to turn Scottsdale into the Happy Satanic Fun Capital of the World.”

The Satanic Temple is clear that it does not “believe in the existence of Satan or the supernatural.” Its tongue-in-cheek approach uses Satan as “a symbol of the Eternal Rebel in opposition to arbitrary authority, forever defending personal sovereignty even in the face of insurmountable odds.” 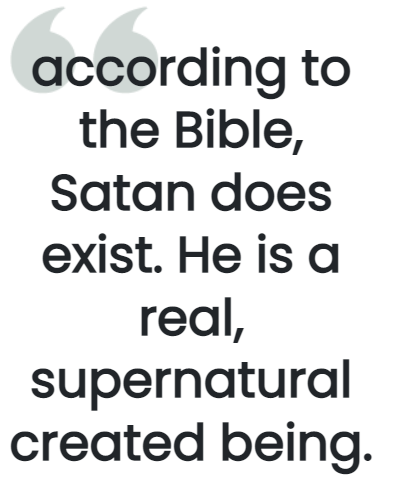 But according to the Bible, Satan does exist. He is a real, supernatural created being. Peer “Behind the Devil’s Hand” for the truth about this “Eternal Rebel.”

The Bible also says that we become what we behold (2 Corinthians 3:18). When your “personal sovereignty” is your die-hard mission, “you set your heart as the heart of a god” (Ezekiel 28:2)—which in actuality is exactly what happened to Satan. The heart of this once-perfect angel “was lifted up” (v. 17), and he imagined himself worthy and capable of taking the place of “the Most High” (Isaiah 14:14).

But “no one is good but … God” (Mark 10:18). We can think ourselves noble and moral and beneficent yet apart from God, all of that is an impossibility.

The Bible distinguishes between two sides alone: good and evil (Deuteronomy 30:15). “He who is not with Me is against Me” (Matthew 12:30), Jesus said. If you’re not seeking after Christ, then you, by default, are following Satan, even if you’re n

ot aware of it.

Maybe “Lupercalia in Scottsdale” will be just another conference, but you might be surprised to learn that the devil has a certain affinity for that great city built atop that wolf’s old cave. We urge you to seek the Bible truth in “Even at the Door—the USA and Rome in Prophecy”—because it’s about to get real.

0 responses on "SatanCon Comes to Arizona"