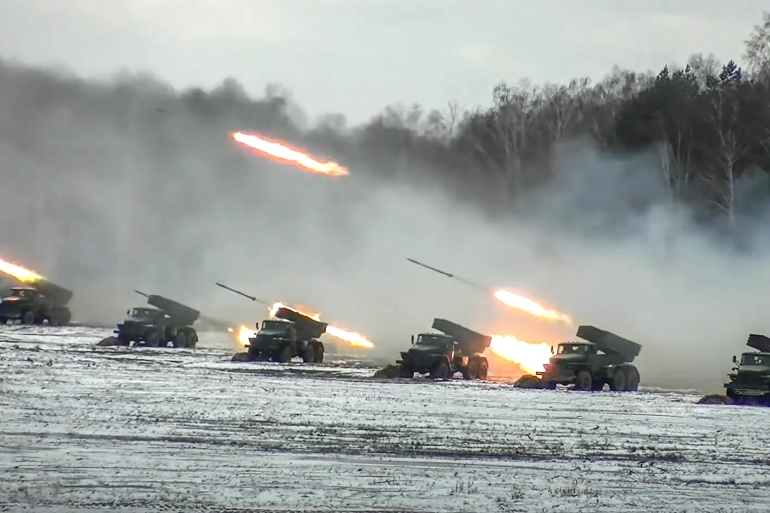 The stage is set.

The continent of Europe is home to numerous nations and diverse ethnic groups and religions—almost all with competing economic and conflicting political interests, differences that over the centuries have often led its people into brutal warfare.

Now one nation, a big one, threatens Europe’s peace and stability. Russia is led by the all-powerful Vladimir Putin, who, while lately speaking about peace, looks as if he is planning an invasion into Ukraine. Is he bluffing? Some years ago, Russia wasn’t bluffing when it annexed a disputed region of Ukraine, and the world did nothing. What about now? How will Russia’s neighbors respond if, making good on the threats, Putin fully invades?

Conditions and tensions were similar in Europe in 1939, the eve of the Second World War. But if this crisis does escalate into a regional armed conflict, would it also lead us into another worldwide conflagration? Should you be concerned? Does the Bible tell us anything?

It’s complicated. Ukraine, which borders Russia, though an independent nation with its own culture, religion (Ukrainian Orthodox Church), and language, has long had ties to Russia and hosts a large, distinctly Russian population. Amid the shifting of borders in Eastern Europe after World War II and the fall of the Soviet Union, Ukraine has had at times a close relationship with Russia—and other times not.

Ukraine had been part of the Soviet Union’s Western border, known as the Iron Curtain, directly ruled by Moscow until the collapse of the USSR in 1991, when it—along with Estonia, Latvia, and Lithuania—broke away.

Much to the Russian’s dismay, however, many of these new nations joined the North Atlantic Treaty Organization (NATO), a war-power alliance of several Western European nations, Canada, Britain, and the United States. Formed in 1949, NATO was designed to deter Communist aggression in Europe. The Soviets responded with its own alliance, the Warsaw Pact, entering into a coalition with seven Soviet satellite states: Albania, Bulgaria, Czechoslovakia, East Germany, Hungary, Poland, and Romania.

Though NATO and the Warsaw Pact never went to war, much of the Cold War, at least in Europe, played out through the NATO-Warsaw Pact rivalry. “By 2008, Moscow’s erstwhile eastern European satellites, once part of the defunct Warsaw Pact, had all been absorbed into NATO, despite earlier pledges by Western leaders that no such expansion would take place.”

Even Paranoids Have Real Enemies

Only those living during the Cold War and the threat of nuclear conflict could appreciate just how seriously Russia is taking the NATO alliance.

The question of NATO expansion forms the essence of Putin’s war cries against Ukraine, which sits on Russia’s border. He does not want Ukraine to host NATO military forces. It would pose, the Russians warn, a dire “security threat.”

Putin’s paranoia makes some sense. Imagine Canada and Mexico forming a military alliance to oppose the United States. And remember that in World War II, when the Soviet Union was invaded by the Germans, Hitler’s armies staged the invasion through Ukraine; indeed, in some places, the Germans were welcomed as liberators because millions of Ukrainians had starved to death under Stalin’s brutal rule.

Fending off the German assault in World War II cost the Russians more than 20 million dead, a reality seared in the Russian psyche. (In contrast, the American war dead in all wars is about a million.) Putin, understandably, would not want another potential adversary parked on his border.

On the other hand, NATO has always been a defensive alliance. It was created specifically to deter a Soviet attack on Western Europe. Even at the height of Cold War tensions, NATO never attacked the Soviet Union, and it’s hard to imagine that NATO, with or without Ukraine, would ever launch a military offensive against Russia today.

Though Putin has claimed that he will not invade Ukraine, the 100,000 troops he has amassed on the Ukrainian border send another message. It signals, too, just how serious he is about Ukraine and NATO, even if he has ulterior motives, such as possession of Ukraine’s major ports on the Black Sea, as well as tightening his grip on the flow of oil to Western Europe, with a major pipeline running through Ukraine.

Look up and lift up your heads, because your redemption draws near.

However much the West wants a diplomatic solution, they refuse to concede to the demand that Ukraine never join NATO. Thus, Putin sees “little ground for optimism.” Though some experts claim that Russia would never invade and that all this saber-rattling is designed merely to wring concessions from the West, plans are being made in case he does, including “brutal” economic sanctions. That would be bad enough, but there are serious concerns that such actions could quickly escalate into wider armed conflict, with both sides possessing nuclear weapons.

Almost two thousand years ago, Jesus signaled that before His return, “nation shall rise against nation” (Matthew 24:7) and that we would hear of “wars and rumors of wars” (Matthew 24:6). This latest crisis is yet another fulfillment of that warning. However much people have predicted that human progress, science, and reason would usher in an era of utopia and peace, it has never happened and, according to the Bible—which predicts “a time of trouble, such as never was since there was a nation even to that same time” (Daniel 12:1)—it never will. Instead, things will get only worse before Christ returns.

Yet, amid these signs, Jesus also said, “Look up and lift up your heads, because your redemption draws near” (Luke 21:28). In other words, however bad things get, we have hope because Jesus will return, and all these wars, rumors of wars, and troubles will be over forever.

To learn more about the Second Coming, check out this Study Guide.

0 responses on "RUMORS OF WAR"