The Law of the King 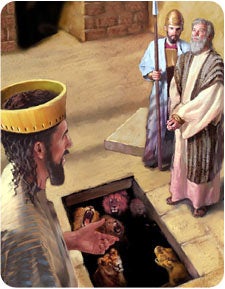 After Darius, king of the Medes and Persians, had conquered Babylon, he executed all Babylonian government officials, except one. That fortunate man was Daniel, a servant of the true God. Seventy years earlier, he had been carried from Judah to Babylon as a captive and made to serve in the palace as an advisor to the Babylonian kings. Daniel became known throughout the kingdom for having “an excellent spirit.” Daniel 5:126:3.

Not only did King Darius spare Daniel, but he “thought to set him over the whole realm.” Daniel 6:3. When the Medo-Persian officials learned that the king was going to promote an old Hebrew captive to rule over them, they were jealous and outraged. So they plotted to entice Darius to sign a law that for the next 30 days, anyone who petitioned any god or man except the king would be thrown into the lions’ den (Daniel 6:7). Apparently these men knew that Daniel was unswerving in his prayer life and firmly committed to obeying the law of his God, which forbids worship of any other gods (Exodus 20:3).

Just as they expected, the officials caught Daniel praying to God from his open window. When King Darius discovered that he had been tricked and that his old friend was headed for the lions’ pit, he tried every possible angle to deliver Daniel from the foolish law he had signed. But the law could not be changed. Daniel went to the lions’ den, and God rewarded his faithfulness by sending an angel to shut the lions’ mouths (Daniel 6:22).

Prophecy tells us that in the last days, God’s people will have to make a similar decision regarding which king and which law they will obey.

1. Can God’s moral law be amended or repealed? 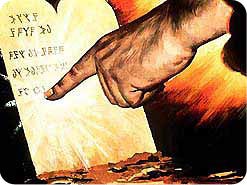 Psalms 89:34 My covenant will I not break, nor alter the thing that is gone out of my lips. Psalms 111:7, 8 All his commandments are sure. They stand fast for ever and ever.

NOTE:Under no circumstances can God’s Ten Commandment law ever be amended or repealed. It is as permanent as God Himself. Three times in the Bible, earthly kings (Herod, Ahasuerus, and Darius) made laws they later wanted to change but could not. If the laws of weak, vacillating kings were unchangeable, how could anyone think that the eternal law of God, written in stone by His finger, could be altered? Look at this comparison between God and His law. 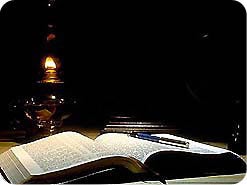 2. According to the Bible, what is sin?

Romans 3:20 By the law is the knowledge of sin.

NOTE:   The devil hates the law because it makes us aware that we need a Saviour from sin. Romans 4:15 states: “For where no law is, there is no transgression.” The law cannot save anyone, but it shows us God’s perfection and our imperfection. 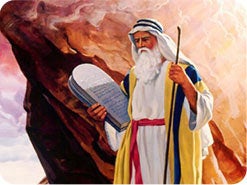 NOTE:   It is God’s Ten Commandment law that says, “Thou shalt not covet.” So breaking God’s Ten Commandment law, which He wrote with His own finger (Exodus 31:18; 32:16), is sin. Every sin that any person could ever commit is condemned by at least one of the Ten Commandments. This is why God’s law is called “broad” (Psalms 119:96) and “perfect” (Psalms 19:7). It covers the “whole duty of man.”Ecclesiastes 12:13. When we are aware of our sin, we look for a Saviour. So the devil especially hates the law, because it sends us looking for Jesus to save and forgive. 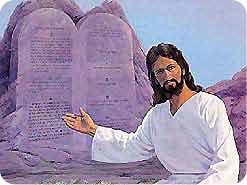 NOTE:   Jesus did indeed keep the Ten Commandments as an example for us (1 Peter 2:21). 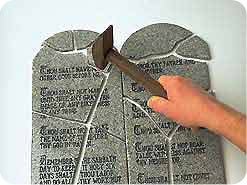 5. How many people have sinned? 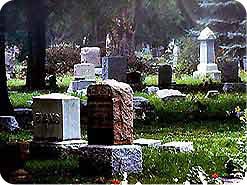 6. What is the punishment for living a life of sin?

NOTE:    If God’s law could be changed, it would not have been necessary for Jesus to die on the cross. The fact that Jesus paid the penalty for sin and died is proof that the law is unchangeable. 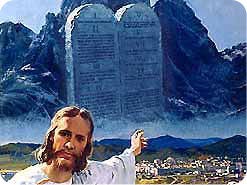 7. Some say the Ten Commandments are not binding for New Testament Christians. What does Jesus say about this?

Revelation 22:14 Blessed are they that do his commandments.

Revelation 14:12 Here is the patience of the saints: here are they that keep the commandments of God.

NOTE:   The New Testament plainly teaches that God’s people will keep His commandments. All of us know that the world is in big trouble today because so many no longer feel it is important to obey God’s law. The Bible speaks of our day by saying, “It is time for thee, Lord, to work: for they have made void thy law.” Psalms 119:126. 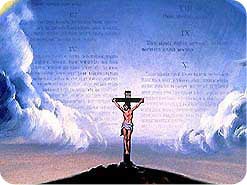 8. How is it possible to keep the commandments?

Romans 8:3, 4 God sending his own Son … condemned sin in the flesh: That the righteousness of the law might be fulfilled in us.

Philippians 1:6 He which hath begun a good work in you will perform it until the day of Jesus Christ.

NOTE:   When a person is born again, Jesus Christ, through His Holy Spirit, moves into that person’s life and miraculously makes obedience possible. 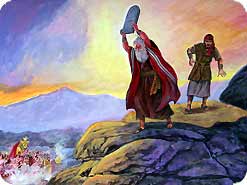 9. What is the old covenant, and why did it fail?

Hebrews 8:8-9. Deuteronomy 4:13 And he declared unto you his covenant, which he commanded you to perform, even ten commandments; and he wrote them upon two tables of stone.

Hebrews 8:8-9 For finding fault with _______, he saith, … I will make a new covenant with the house of Israel and with the house of Judah. Not according to the covenant that I made with their fathers in the day when I took them by the hand to lead them out of the land of Egypt; becausethey continued not in my covenant, and I regarded them not, saith the Lord.

NOTE:   The fault with the old covenant was with the people, not with God or His law. 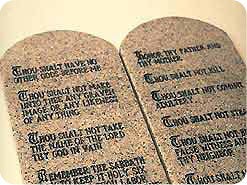 10. Upon which law is the new covenant based?

NOTE:   The two covenants were agreements between God and His people. The old covenant failed because it was based upon the faulty promises and works of the people.

Exodus 24:7 All that the Lord hath said will we do, and be obedient.

The new covenant succeeds because it is God’s law written in the heart and is based upon Jesus’ promises and His miracle-working power.

Hebrews 8:10 I will put my laws into their mind, and write them in their hearts.

A person’s entire nature is changed, so he finds doing God’s will a pleasure. Notice that the new covenant is based on the same law, but it is written in a different place (the heart) and based on better promises (God’s). 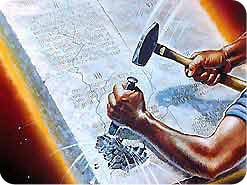 Romans 3:31 Do we then make void the law through faith? God forbid: yea, we establish the law.

NOTE:   Those who have been forgiven by Jesus for breaking His law are doubly duty-bound to obey His law. And sensing His blessed forgiveness, they are more desirous than others to happily follow Jesus. 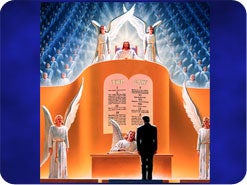 12. Are people saved by keeping the law?

NOTE:   No one is saved by keeping God’s law. All are saved by the miracle-working grace of God. But those who are saved, or transformed, by the grace of Jesus will want to obey His law as an expression of their love and thanksgiving to Him.  John 14:15 If ye love me, keep my commandments. 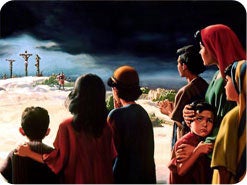 1 John 5:3 This is the love of God, that we keep his commandments.

NOTE:   Love is the magnificent motivator. The first four commandments have to do with my duty to God. When I love Him, obeying those commands is a pleasure. The last six commandments embrace my duty to people. If I truly love people, I will not want to do anything that would hurt them. 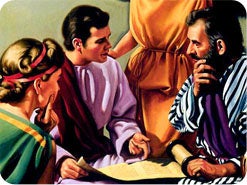 15. Are some Old Testament laws no longer binding upon Christians?

NOTE:   Yes, the ordinances that regulated the priesthood and the sacrificial system have been abolished because they prefigured Christ (Colossians 2:13-17). He fulfilled them as the true Lamb of God.

16. Whom does the devil especially hate? 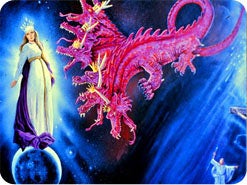 17. What are some of the glorious rewards of keeping God’s law? 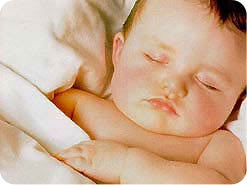 Psalms 119:165 Great peace have they which love thy law: and nothing shall offend them. 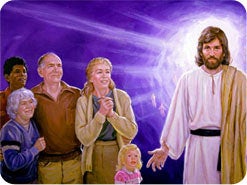 18. Do you desire to have a loving relationship with Jesus that will lead you to be one of His joyful, obedient children?

Parallels Between Bible Characters and Jesus
Many of the Bible heroes are types and patterns of Jesus. Moses, Joseph, David, and Solomon were all people who, at some point in their lives, foreshadowed the life and ministry of Christ. The similarities between their experiences were intended to help the world recognize Jesus as the Son of God.

Daniel’s experience with the law and the lions is one example of such a spiritual parallel. Notice the following similarities:

-Daniel’s enemies could find no fault with him, so they created a trap to accomplish their purposes (Daniel 6:5-9). Likewise, the chief priests and scribes conspired with Judas Iscariot to make a trap for Jesus (Luke 22:2-6). However, Pilate declared that he found no fault in Jesus (John 19:4).

-After Daniel was thrown into the lions’ den, a stone was placed over the entrance and sealed with the government seal (Daniel 6:16, 17). Jesus also was placed in a tomb that had a large stone at the door and was sealed by the government (Matthew 27:58-60, 65, 66).

-Both Daniel and Jesus were innocent and emerged alive from their earthen prisons (Daniel 6:23 Mark 16:5, 6).

See if you can find other parallels between the lives of Bible characters and the life of Jesus!